Humanfobia is an ambient soundtrack gothic horror duo, that has a knack for bringing to you (with perfection,) a world living inside the watery abyss of pitch black nothingness. They started making their music together in 2015 after Spectra came to Chile in May of 2014. Originally, Sábila Orbe had started this project as a solo artist in 2011, but once Spectra arrived, that all changed. Since then, no hope lies here in the reaches of this double minded meeting of creepy creative consciousness. Horror and mayhem are what you can expect, ever since these two discovered their mutual chemistry, and then developed their sound into what it is currently.

As an official music duo, they are Mist Spectra and Sábila Orbe: a pair with a passion for the macabre and a classic authenticity that gives blunt testimony to the power of an old fashioned midnight scream.

Both with beauty and brains, their brand of terror brings with it, the madness of the unknown, and the deliberate display of humanity’s most monstrous thoughts, and most vivid “phobias.” Ha! Ha! 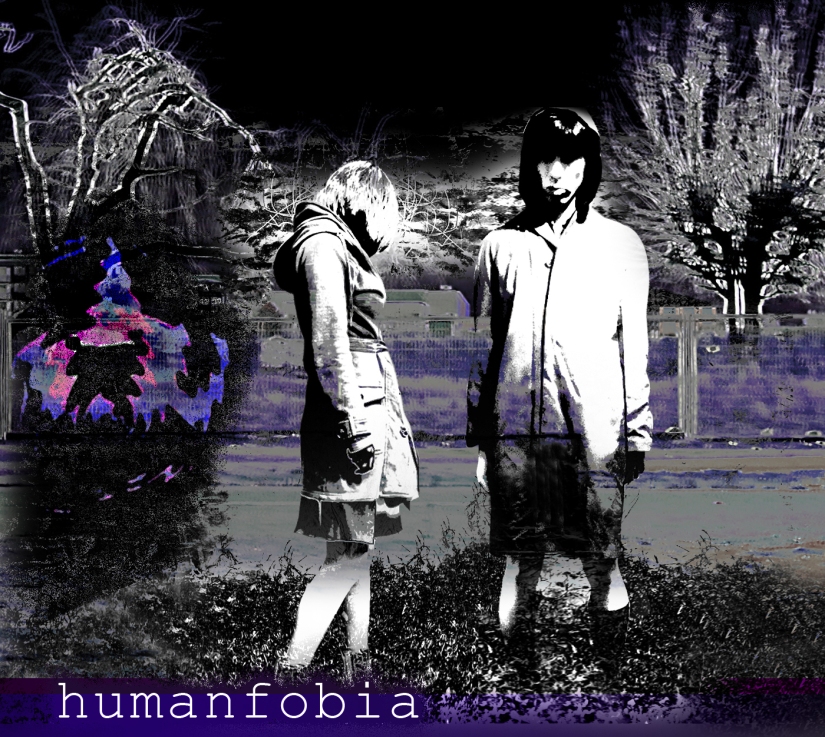 While listening to ‘Humanfobia,’ you will hear Mist’s voice, both soft and inviting, and yet filled with sadness, as she speaks to you through the black holed portal that is about to suck you in and devour you whole.

One would neither be chewed up nor swallowed in chunks, if it was in fact possible to become the next unfortunate & unwilling participant caught inside Humanfobia’s carnivorous death trap.

However, perhaps blood and guts would still be on the table, after taking a ride through a Humanfobia chopping block of factorial butchery. Maybe you would even receive the luxury of having your innards liquidated & then sucked out for the novelty of it all. Rest assured that in either scenario, the digestive process of your body and mind would be slow and painful, and you would receive full honor of embracing every ounce of fear, throughout the duration of this H.P. Lovecraft landscape of sound.

Both Sábila & Mist have told me that Mist provides visual support for the cover art via modeling, plays the keyboard, and is the female vocalist and current lead singer for the project. Sábila provides the male vocals (typically through voice generators for the affect of discomfort & dissonance.) He also helps create the cover art, writes the music, operates the mixers, and acts as the project’s sound programmer. 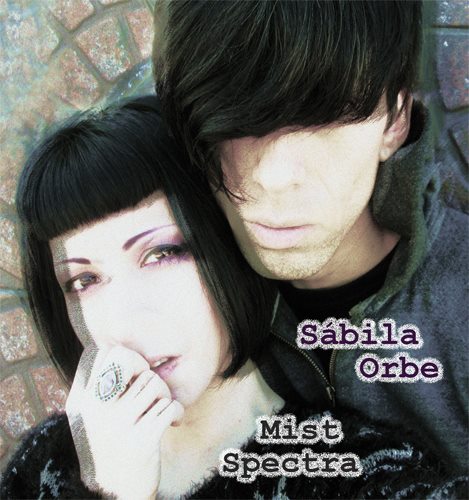 However, this duo has more than one project to regularly maintain. One is called ‘Yakaanima’ and the other project yet to be mentioned, is called ‘Filmy Ghost,’ (which is more of a collaboration project.) All three projects are under the company name “Cian Orbe Netlabel.”

Sábila Orbe: “The similarities in these projects are that in all, I’m the mixer, the sound programmer and composer. Mist helps me with the cover artworks as a model and also with promotional images for each project. Apart from that, the three don’t have specific genres and our music can vary between, witch house, dark ambient, noise, glitch, sound collage, ambient, witch-wave, future garage, or a general mix, but always with an experimental and dark sound.” 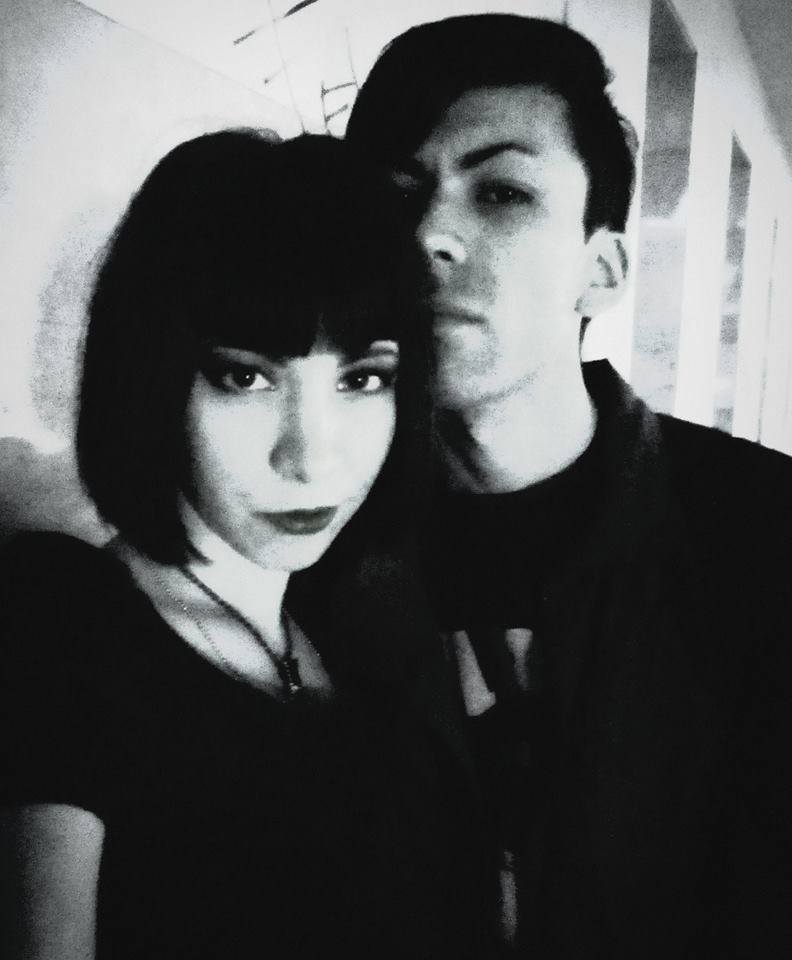 One of my particular track favorites is ‘Gato Negro,’ which is from Humanfobia’s latest album ‘Esoterika.’ During this song, you can hear either the sound of babies or cats (likely cats considering the title) crying in the distance. It’s hard to say which, but you can feel that something ominous is about to occur. Perhaps this feeling is indicative of a realization that something menacing might very well be coming for you, so you’d better not stay long. However, even running as fast as your mind can carry you, for you, the nightmare is here and is intent on coming to retrieve you and claw your dreamy eyes out of your pretty head.

(Below) are the lyrics provided to ‘Gato Negro,’ both in Spanish and in English.

You can sense a feeling of loss within many of Sábila’s and Mist’s tracks, whether that be the loss of love or a loss through death. The meaningless nature of existence comes to mind within the painful poetic atmosphere that they have delivered to us. Only the shadows remain. Everything else from the physical world is gone forever, destroyed by an erratic, bloodthirsty, and violent intelligence that refuses to reveal its true form until it is too late.

Another favorite of mine, the song ‘Estas Muerto,’ is from the 2018 EP ‘Coimetrofilia.’ As you listen, it almost feels like you have been inserted into some sort of demented cartoon horror world. You can picture yourself running down a dark corridor that you can’t seem to reach the end of, as a sinister otherworldly being talks to you and tells that you’ll be dead soon and that there is nothing you can do. There is no avoidance of the inevitable. There is no permanent denial, because you can’t deny it when death finally arrives in its chariot with hatchet in hand. No one is coming and no one will save you now.

Being that I am a fan, I wanted to hear a little bit about Sabila’s and Mist’s plans for the future of the project, as I would gladly jump at the chance to see them live, if given the option to do so.

Sábila Orbe: “Our music is made for people who like the dark and experimental and also those who don’t have issues with listening to something new (that does not cater to a specific genre.) Usually, it’s the people who like the mixture of genres and have a total open mind, that appreciate our music.”

Mist Spectra: “We don’t play live for a lot of reasons,” said Spectra. “The first reason is we are too shy for that and we have scene panic. Apart from that, we think that our music is too weird for it be played live and is not danceable, even if one were to consider it an easy listening project. Videoclips and audiovisual creation isn’t really our thing. We had some offers to play in Santiago, in Lima, Peru and in Buenos Aires, Argentina, but we don’t at this time feel mentally ready to make live presentations.”

Therefore, as a fan, you can always properly listen and enjoy the music of ‘Humanfobia,’ but at this time, don’t expect to be buying tickets to one of their shows in the near future. Hopefully they might change their minds at some point, but currently it’s a no go. It is true that the pressure of playing out can create a certain amount of anxiety and panic if you are a musician, especially if you are prone to stage fright. I myself, have had issues before, facing up to the idea of playing live, so I can relate to this feeling in certain respects.

THE UNDERGROUND OF RANCAGUA, CHILE

I wanted to know a little bit more about the underground music scene of Chile, as I have never been there and as always, I have this strong fascination pertaining to this particular topic of musical conversation, especially concerning the “gothic” underground music scene. I wanted to know more, so this of course is one of the questions I had to ask.

Sábila Orbe: “Here in Chile years ago, existed a little scene of dark, witch electronic music with some projects like Tenebrae, Warloc, Violence, & Casa Occulta, but it was a very short time (approximately between 2012 to 2014.) After the dissolution of Tenebrae, the scene was down. For our own project, we are closer to that kind of sound (more noisy, witch and electronic.) That’s why I can tell  you about that scene and not about the goth scene that is more focused on death rock, gothic rock and horror punk, but not so much on electronic music, here in Chile.”

Well, if ‘Humanfobia’ were ever to come to the U.S., electronic music would certainly be appreciated, at least in NYC, and especially at places like “The Pyramid Club” in Manhattan. Perhaps, Rancagua, Chile will come to their senses eventually. As far as Humanfobia’s sound being dance worthy or not, that isn’t always necessarily of the utmost importance, at least for someone like myself. The experimental should not be left out from receiving public attention. After all, it is the experimental that develops and expands upon humanity’s range of musical contribution. Without experimentation, the greatest Eras of music would have been non-existent, and then what? We’d live in a world without musical evolution? All music would be exactly the same? Could we say that music was music at all? How boring would that be?

In short, I leave you with a ‘Filmy Ghost’ collaborative track called ‘Blackstems‘ featuring the SoundCloud artist ‘Uunslit.’

If you enjoyed this article, please subscribe to our WordPress and feel free to check out Waking Dream’s YouTube and SoundCloud pages at these links here.

Also, if you liked what you heard from Humanfobia, Yakaanima, and Filmy Ghost, why not stop by and listen to Mist’s and Sábila’s other deliciously spooky musical creations at the following provided links via Hear This, Bandcamp & SoundCloud?

Thank you so, so much! This has been another October article brought to you by Waking Dream’s SoundCloud Music Reviews. Until next time…

Waking Dream NYC is a goth experimental music project created by Lyra Daydream & Liz Lund. The two met in 2014. Their passion for the odd, dark, twisted & of course, morbid brought them into the depths of new and innovative musical exploration which could only be described as a mesh of the genres of dark wave, witch house, gothic rock and medieval electronica. View all posts by wakingdreamnyc